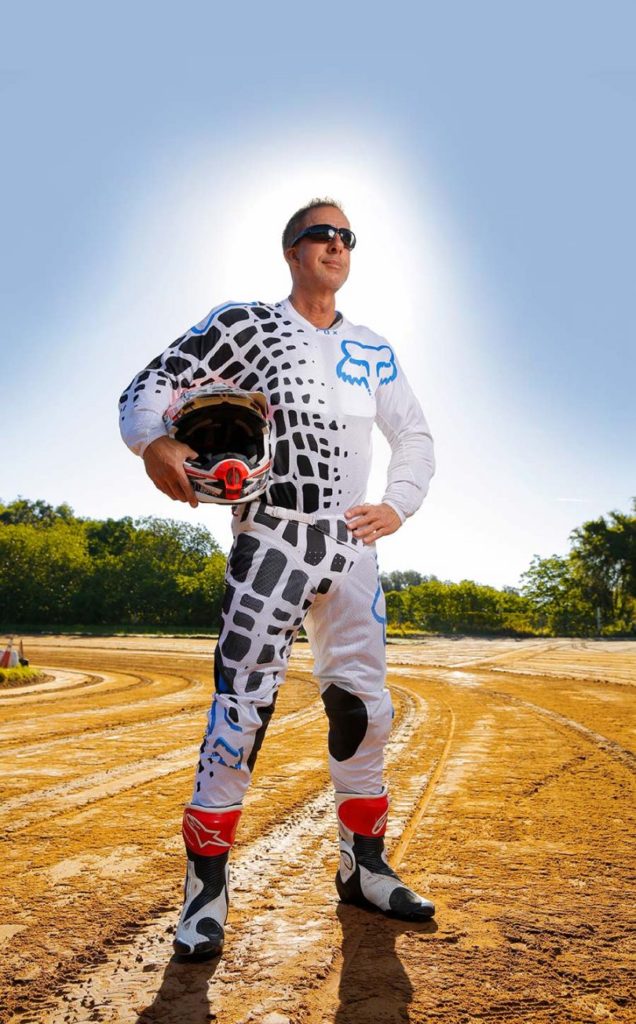 Motorcycle racer Monty Klein: ‘I’ve been racing my whole life, so it is in me. To stop doing something you really love would kill me.’

Open-heart surgeries, a pacemaker, four broken ribs, a shattered left shoulder blade, punctured lung, punctured spleen, and a broken right hand never stopped Monty Klein, 56, from getting back on his bike and pursuing his passion for motorcycle racing.
Of course, he had to wait for the OK from his doctors.
“When you have a love or passion for something, you’re not going to let anything stand in your way, no matter if it’s golf, bowling, or motorcycle racing,” he says. “Why would you? Look at some of these veterans who come back from overseas with their legs blown off. They go get prosthetic and you see them competing or running a marathon, and that is very inspiring.”
Monty has been racing since age 9, starting with go-carts, then motocross, and now he’s regarded as one of the Nations best in the 30-plus, 40-plus, and 50-plus age categories. He has earned multiple state championships in the flat track series of the Southern Dirt Track Association.
He competed in the nationals of the American Motorcyclist Association Dirt Track 2017 Championship hosted over the Fourth of July weekend in Du Quoin, Illinois, where his goal was to win and be declared the fastest amateur racer in the country.
After finishing second in several individual events, he was in position to win the overall championship in the 30-plus class and take a solid second in the 40-plus and 50-plus classes.
“But in the last series of events, my engine blew up!” Monty says, devastated to drop to third. “It was a huge bummer, but that was my first time out there. Now they know who I am, so I will be back next year and kick some butt!”
Monty’s determination drives his desire to succeed.
“I don’t believe I ever heard Monty say the word ‘can’t’, or that there is something he can’t do because of either his age or health issues he has had. He just sees them as challenges and works on ways to improve and change things up,” said a friend of Monty, Jan Taylor. “He is unique as far as anyone I have ever met, and he’s amazing to watch. I think what I had learned from him is as long as you’re breathing, there is no excuse. Go for it and live your life.”
Monty doesn’t see himself giving up racing anytime soon. He even jokes about racing at age 100: “If I was able to, I’d race my wheelchair.” 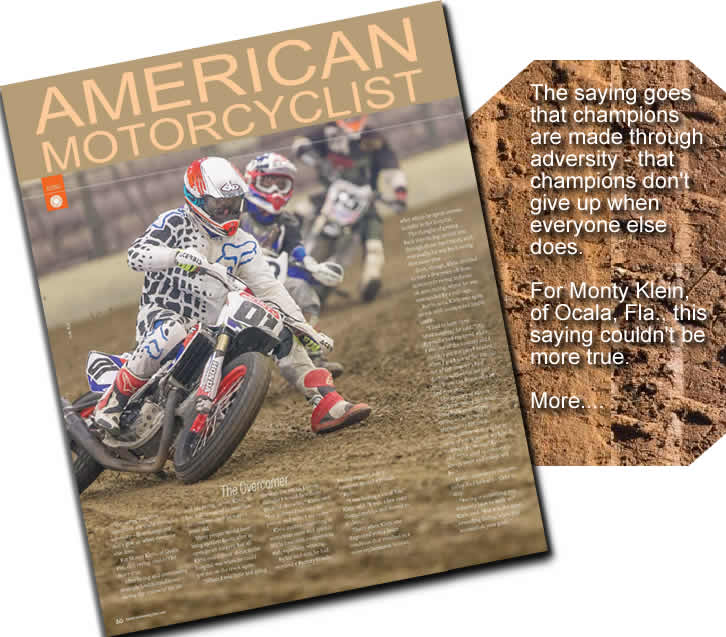 The saying goes that champions are made through adversity-that champions don’t give up when everyone else does. For Monty Klein, of Ocala, FL, this saying couldn’t be more true. After facing and overcoming multiple health conditions during the course of his life and his racing career, Klein, 56, has still managed to continue to compete since he was 12 years old. Many people would have hung up their boots after an open-heart surgery, but all Klein could think about in the hospital was when he could get out on the track again. “When I was little and going through the ranks, I never thought I would face those kinds of obstacles,” Klein said. “But it shaped me into the person and racer I am today.” Klein started competing in motocross races and quickly fell in love with competition and, especially, winning. By his mid-20’s, he had received a Factory Honda Racing support ride to compete aboard a Honda CR-500. “I was having a lot of fun,” Klein said. “I won a few state championships and moved to A class.” That’s when Klein was diagnosed with a heart condition that resulted in a valve replacement in 1990, after which he spent several months in the hospital. The thought of getting back into racing carried him through those hard times, and eventually, he was back racing that same year. Soon though, Klein decided to take a few years off from motorcycle racing to focus on auto racing, where he was surrounded by a roll cage. But in 2012, Klein was again struck with unexpected health issues. “I had to have open heart surgery,” he said. “My appendix had ruptured while I was out of the country and I couldn’t get the care I needed. When I got back to the States, one of the country’s best doctors worked on me and said it was the worst case he had ever seen.” The severity of Klein’s health prevented him from going back to motocross racing, so he turned his attention to flat track. “No matter what was set in front of me, it was in my blood to always be racing,” Klein said. “The need to compete is always there and always will be.” Klein continues to compete today, and he has no plans to stop. “Racing is something you definitely have to work at,” Klein said. “But it is the most rewarding feeling when you accomplish your goals.”

Check out other videos by clicking here